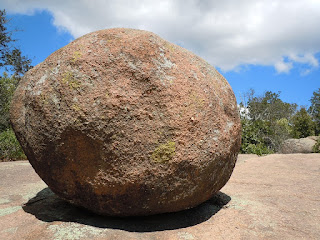 I'd like to thank Connie Pease for guest blogging today.

Our neighbors just had an enormous rock installed at the front of their expansive yard. It has their address engraved on it since the house is set rather far back from the street. I watched the landscapers put it in place. They needed a forklift and a lot of muscle. It's there now and it's not going anywhere. It's raining today and that rock doesn't even notice. When the blizzards come in a few months, the snow might cover it up, but it won't bother it. Let the winds blow! On some future searing hot summer afternoon that rock will stand as though it's a perfect day.

We have a rock, too. God is our rock during times of struggle and stress and storm. My grandpa used to sing - and I use the term loosely here - a few measures of a song based on Psalm 40. Apropos of nothing, suddenly, and with great gusto he would break out into something like, "He lifted me out of the slimy pit and set my feet on the rock to stay". Grandpa was a Greek immigrant who started out
shining shoes and ended up Dean Emeritus of a college. He knew about slimy pits and he was grateful for the Rock. A rock is a great place to hide for protection from an enemy or bad weather. It's a solid place to stand in victory. Aren't we blessed we know Him?

Jesus is the Rock in a weary land! Happy Labor Day, Jodie!

Great reminder, Lisa. Thanks for stopping by. :) Hope you've had a great day too.