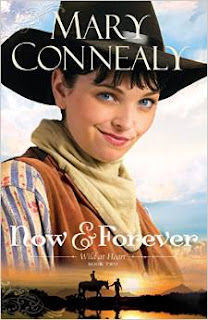 Shannon Wilde enjoys life on her simple homestead, tending sheep until she gets swept over the side of a cliff by Matthew Tucker. Well, in all actuality she's the one responsible for hurling them down the side of the mountain and into the raging river full of rocks, rapids, and treacherous water.

Matthew Tucker was content with his life in the backwoods until his eyes met the blue gaze of one Shannon Wilde. He wasn't fooled by her dress and immediately knew she was a woman, especially when he find himself strapped to her in order to keep them alive through the rapids.

Mary Connealy weaves a delightful tale in her Wild at Heart series featuring the Wilde sisters. I found this book to live up to Mary' reputation of writing lively historical romances. I rate it a 4 out of 5 for happily-ever-afters.

This book was provided free for review by Bethany House Publishers - 2015.
Posted by Jodie Wolfe at 8:00:00 AM No comments: 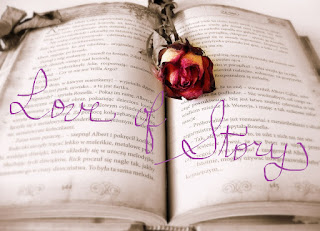 In one week, I'll be starting a new weekly feature on my blog - 'Love of Story'. Authors with new releases will be interviewed and share a portal into their writing world. I'm excited to meet new authors and to help encourage them along in their writing journey. You'll want to stop by each week to meet a different author.

Here's the line up for July:

Tell a friend and I look forward to seeing you next week.

Check Out This Interview of My Experience with Editor Conferences :)

Today my agent, Linda S. Glaz has a post about my experiences. You can check it out here. 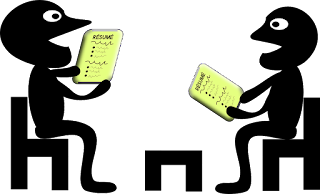 Beyond the Mask - Great Summer Movie 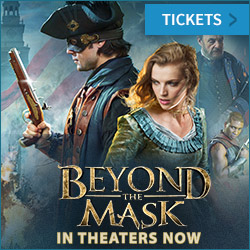 My husband and I went to see this movie opening weekend (last week) and really enjoyed it. It was especially fun for us too, knowing that the producers had been homeschooled. After 16+ years homeschooling my two sons, I can remember when they worked on making movies too. This is a great family film, full of faith, romance and swash-buckling action. I highly recommend it. :)

Here's some great info about the movie and its producers. You don't want to miss it.

LOS ANGELES – June 10, 2015 – The swashbuckling family, action-adventure film BEYOND THE MASK—with CGI and green-screen effects unprecedented for the faith genre—scored with fans and at the box office in its theatrical debut this weekend.

“BEYOND THE MASK is a big favorite with family audiences,” Director Chad Burns said. “The 100-city theatrical opening took it wider, more audiences responded, and we’re loving the response.”

From Burns Family Studios and Freestyle Releasing, BEYOND THE MASK is a rousing, epic, historical drama that reviewers called “stunning” and “groundbreaking.”

“Go watch this great movie,” one Variety reader commented. The next comment: “Director great
. . . story great and full of surprises. MUST SEE.”

“A wonderfully balanced mixture of Zorro-esque action/adventure, Jane Austen romance, with a James Bond-inspired villain set in the familiar and resonant pages of our own American history,” Caleb T. Carrol wrote on Fandango.

BEYOND THE MASK brings history to life with the story of Will Reynolds, leading mercenary for the British East India Company. Will has been double-crossed and now is on the run in the American colonies. To redeem his name and win back the woman with whom he's never been fully truthful, Will takes on a new mask to thwart his former employer. As his past closes in on him, Will must somehow gain the trust and the help of his beloved Charlotte—as well as Ben Franklin—as he races time to defuse a plot of historical proportions. The revolutionary BEYOND THE MASK is a faith-filled adventure celebrating grace, liberty and the true freedom found only in Christ.

"On the same stage as NATIONAL TREASURE and ZORRO.” Plugged In

“A groundbreaking, fast-paced action adventure with computer-generated images rivaling anything out of Hollywood.” The Baptist Press

Besides the 100-city debut, BEYOND THE MASK is available in other locations in theaters on demand. The film initially opened in April on Gathr’s on-demand platform at a record-setting 440-plus theaters nationwide.

“If BEYOND THE MASK isn’t in your city, just reserve a theater through Gathr and bring it,” Producer Aaron Burns said. “Everything a fan needs to see the movie in a local theater is on our website at BeyondtheMaskMovie.com.”

The story-behind-the-story of BEYOND THE MASK is another compelling tale. Aaron and Chad Burns are homeschooled cousins who began making films with family members for fun and school projects. Early efforts morphed into Burns Family Studios, creators of PENDRAGON, an action-adventure film that won awards and played nationally.

Starting the process for BEYOND THE MASK four years ago with a successful Kickstarter campaign, the Burns cousins marshaled an army of volunteers and movie professionals to shoot the film in 2012-13. They even attracted international star John Rhys-Davies of The Lord of the Ring series to the project.

The on-demand release posted record box office results for the Gathr platform. In the two weeks following the opening, it managed a box-office-leading per screen sales average for the Monday-Wednesday time frame. That strong on-demand opening then paved the way for the full theatrical release.
BEYOND THE MASK is from Director Chad Burns and Producer Aaron Burns, with a script co-written by Stephen Kendrick (COURAGEOUS, FIREPROOF) and Paul McCusker (Adventures in Odyssey). It stars Andrew Cheney (SEASONS OF GRAY) and Kara Killmer (Chicago Fire) and John Rhys-Davies (RETURN TO THE HIDING PLACE, THE LORD OF THE RINGS).

About Burns Family Studios
Burns Family Studios happened when families with a passion for creative storytelling aimed to share the joy of Christ. Its first feature film, PENDRAGON: SWORD OF HIS FATHER, a historic epic, was set in the Dark Ages of Britain. Since its 2008 debut, PENDRAGON has been recognized at 15 film festivals, purchased by the world’s largest Christian TV network, distributed across North America and dubbed by foreign distributors into Spanish, German and Portuguese.

Jodie again.... Show your support by watching this in the theaters and let Hollywood know how much Christian films are needed and appreciated.
Posted by Jodie Wolfe at 9:00:00 AM No comments:

A Worthy Pursuit by Karen Witemeyer 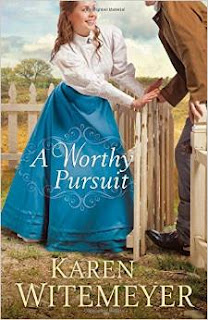 Charlotte Atherton is determined to keep her three young charges safe, even after losing her position at Sullivan's Academy for Exceptional Youths. She is particularly driven to protect Lily, the young girl she pledged to raise after the girl's mother died, even if it means keeping her away from her dishonest grandfather.

Stone Hammond is determined that after he tracks down the kidnapping teacher, it will be his last assignment and he'll finally have the money he needs to settle down and purchase his own property. How hard can it be to bring in one pesky female?

Karen Witemeyer weaves a delightful tale of two who are at odds with each other but must find a way to protect a young girl. I found her new novel to be a 5 out of 5 when it comes to happily-ever-after endings.

This book was provided free for review by the author and Bethany House Publishers - 2015.
Posted by Jodie Wolfe at 7:00:00 AM No comments:

When You Pass Through the Waters.... 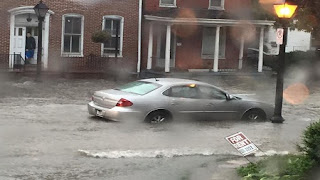 Do you ever feel like you are passing through the waters... or being swept away by them? I have to admit to being in that state on Tuesday when three inches of rain swept across our area in a very short amount of time. Fifteen minutes after the rain began my husband and I went downstairs to check on the status of our basement, only to find water pouring in from the window wells.

We used two shop vacs. One no sooner filled and my husband went to empty it before I had the next one filled as well. It was the worst flood we've ever experienced in our home. Two rooms were completely flooded. One room has linoleum and the other has a very thin carpet. Since the carpet is put down right on top of cement, we should be able to salvage it.

After hours of moving things out of harm's way, sucking up water, and trying to dry things out, we were exhausted. Now we're handling the aftermath... dealing with everything that had to be moved, etc. Tuesday I felt numb.... I didn't even have words. Yesterday I felt overwhelmed by the task before us of downsizing so that if/when this happens again, it won't be such a struggle to deal with in the future.

I couldn't help but think of a future scene in the novel I'm working on. It's a scene that will depict what was the worst flood my town experienced. This is the bridge that I'll be writing about. 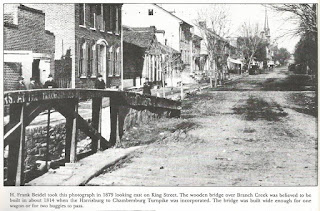 Through all the struggles I face in this life I take comfort in the first section of the scripture above:
“Do not fear, for I have redeemed you;
I have called you by your name; you are Mine.
I will be with you."

What storms have you been going through lately? How can I pray for you?