The Maid of Fairbourne Hall by Julie Klassen

Julie Klassen weaves the tale of aristocrat Margaret Macy escaping her spoiled lifestyle to avoid an unwanted marriage. If she can remain unwed for several months, until her next birthday, she will receive her inheritance. The Maid of Fairbourne Hall is a delightful saga of a spoiled, rich, young woman going in disguise as a maid in England during the early 1800's. Not until after she arrives at her employment, does Margaret realize she'll be working in the home of the man who proposed marriage several years ago. She spurned Nathaniel Upchurch in favor of his brother.

I love the way Margaret learns the hard way to appreciate people for who they are, no matter what station of life they are in. She discovers many valuable lessons along the way, as she adjusts to poverty and being a servant. Through working, Margaret acquires the ability to see beyond herself and her own needs. She also finds out what it means to sacrifice.

I found The Maid of Fairbourne Hall to be a delightful read, and one I highly recommend.

* This book was provided free for review by Bethany House Publishers. 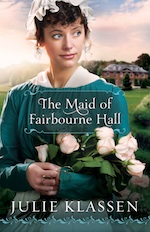 About the book:
To escape a scheme to marry her off to a dishonorable man, Margaret Macy flees London disguised as a housemaid. If she can remain unwed until her next birthday, she will receive an inheritance, and with it, sweet independence. But she never planned on actually working as a servant. And certainly not in the home of Nathaniel and Lewis Upchurch--both former suitors.
As she fumbles through the first real work of her life, Margaret struggles to keep her identity secret when suspicions arise and prying eyes visit Fairbourne Hall. Can she avoid a trap meant to force her from hiding?
About Julie:
Julie Klassen loves all things Jane--Jane Eyre and Jane Austen. A graduate of the University of Illinois, Julie worked in publishing for sixteen years and now writes full time. She has won the Christy Award: Historical Romance for The Silent Governess (2010) and The Girl in the Gatehouse (2011) which also won the 2010 Midwest Book Award for Genre Fiction. Julie and her husband have two sons and live in a suburb of St. Paul, Minnesota.
For more information, visit www.julieklassen.com
Link to buy the book:http://www.amazon.com/dp/0764207091/ref=as_li_ss_til?tag=sprightly-20&camp=0&creative=0&linkCode=as4&creativeASIN=0764207091&adid=1TCYV1DRSTV23NKEQ170
Posted by Jodie Wolfe at 9:49:00 AM

Thanks for the great review. So glad you enjoyed the book!

Julie Klassen wrote this book with an interesting premise--that is very reminiscent of Austen and the themes of her books. A young English woman lives with her mother and stepfather in London. Her stepfather is conspiring for his nephew to marry the daughter and take possession of her coming inheritance. When she realizes these intentions, she runs away with her maid and faces the harsh reality of servants' lives. She becomes a maid at Fairbourne Hall, the home of a man who she once rejected as a suitor. Hmmm... Can you tell yet where the story is heading?

If you've been enjoying Downton Abbey on PBS, then I think you'll enjoy the author's descriptions of the life of the servants in this novel. I did.